There’s more than one way to boost your retirement income 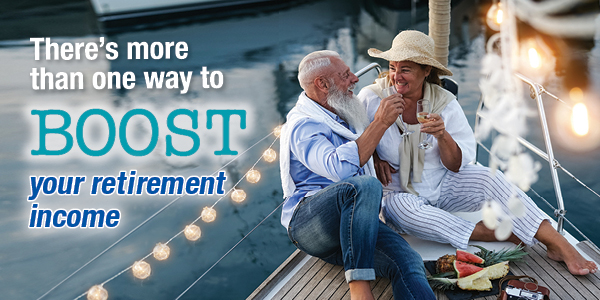 There’s more than one way to boost your retirement income

After spending their working life building retirement savings, many retirees are often reluctant to eat into their “nest egg” too quickly. This is understandable, given that we are living longer than previous generations and may need to pay for aged care and health costs later in life.

But this cautious approach also means many retirees are living more frugally than they need to. This was one of the key messages from the Government’s recent Retirement Income Review, which found most people die with the bulk of the wealth they had at retirement intact.i

One of the benefits of advice is that we can help you plan your retirement income so you know how much you can afford to spend today, secure in the knowledge that your future needs are covered.

Making the most of super

According to the Review: “It appears (most people) see superannuation as mainly about accumulating capital and living off the return on this capital, rather than as an asset they can draw down to support their standard of living in retirement.”

The figures back this up. The average super account balance on the death of a member in the year to June 2020 was $102,660.ii While not a huge amount, it is an indication that retirees may be able to withdraw more than the minimum amount from their super to live more comfortably without breaking the bank.

Under superannuation legislation, once you retire and transfer your super into a pension account you must withdraw a minimum amount each year. This amount increases from 4 per cent of your account balance for retirees aged under 65 to 14 per cent for those aged 95 and over. (These rates have been halved temporarily for the 2020 and 2021 financial years due to COVID-19.)

One of the common misconceptions about our retirement system, according to the Retirement Income Review, is that these minimum drawdowns are what the Government recommends. Instead, they are there to ensure retirees use their super to fund their retirement, rather than as a store of tax-advantaged wealth to pass down the generations.

In practice, super is unlikely to be your only source of retirement income.

The Retirement Income Review, and the government, argue that the family home should be included with voluntary savings or as a fourth pillar, but more on that later.

Most retirees live on a combination of Age Pension topped up with income from super and other investments. Despite compulsory super being around for almost 30 years, over 70 per cent of people aged 66 and over still receive a full or part-Age Pension.

While the Retirement Income Review found most of today’s retirees have adequate retirement income, it argued they could do better. Not by saving more, but by using what they have more efficiently.

Withdrawing more of your super nest egg is one way of improving retirement outcomes, but for those who could still do with extra income the answer could lie in the nest itself.

Australian retirees are some of the wealthiest in the world, with median household wealth of around $1.4 million. Yet close to $1 million of this wealth is tied up in the family home.

Studies have also shown that most people use a form of mental accounting which sets aside super for income, other financial assets for emergencies and the family home for future bequests.iii

That’s a lot of money to leave to the kids, especially when many retirees end up living in homes that are too large while they struggle to afford the retirement lifestyle they had hoped for.

For these reasons there is growing interest in ways that allow retirees to tap into their home equity (see box). Of course, not everyone will want or need to take advantage of these options, but they are available if you would like some extra income.

Here are some options to use your home to generate retirement income:

Discussions about retirement in the media and around the kitchen table often focus on how much super you have and whether it’s enough. Super is important, but it’s not the only source of retirement income.

If you would like to discuss your retirement income needs and how to make the most of your assets, give us a call.

Alex O’Neill and Plan Financial Solutions Pty Ltd (ABN: 44 648 985 479) are Authorised Representatives of Synchron AFS Licence No. 243313
Unless specifically indicated, the information contained in this email is general in nature and does not take into account your personal situation.
You should consider whether the information is appropriate to your needs, and where appropriate, seek personal advice from a financial adviser.